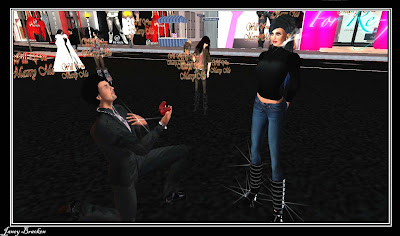 SL London seems to be the place for people to meet and fall in love, as ther 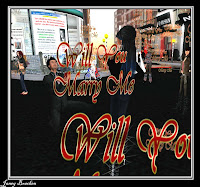 e are quite a few devoted couples in the virtual capital. A few days ago I got a message from SL London sim owner Debs Regent telling me that there was some excitement going on outside the London Underground Club in Knightsbridge, so I hurried over there. There was excitement indeed, avatar Dougal MacMoragh was down on one knee, in the middle of the road, asking Bernadette Halostar to marry him. Watched by a small group of people, Bernadette said ‘Yes’ and made Dougal the happiest man in SL. 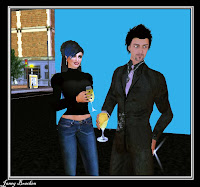 ell me about their ‘on line’ romance. Surprisingly they are both fairly new to SL, Dougal joining in mid November and Bernadette early in December, so it did not take long for them to establish how they felt about each other.

Dougal had already found SL London before Bernadette had been there, and he had spent some time greeting new avatars and giving them advice (he was later to be made an official greeter by Debs). He told me he had met Bernadette at the Underground Club, saying ‘I was helping ppl (people) as usual, and there she was! she asked me to go to another club and as I was taking her round, we just clicked’ he added ‘she is a lovely person.’ 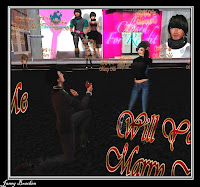 ostly SL, but we are close friends in real life.’ They told me that they are, in actual fact, quite a distance from each other, Dougal is English and Bernadette is American, with a 6 hours time zone difference between them. Dougal added ‘hope to meet, if she'll let me, lol (laugh out loud)’

I said that they had got engaged very quickly and I wanted to know who had proposed, Bernadette said ‘I think it started out me teasing him.’ Dougal added ‘Well it was a joint decision really, she took me a few places, me, I took her, and its grown.’

Just as it was a quick engagement, they have planned to have the SL wedding very soon as well. Dougal told me ‘we marr 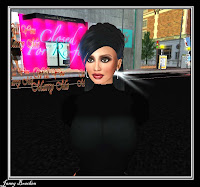 y at the end of this month, 31st’ They even have a wedding arranger, club host gertyflirty Goldlust, who has just started her own SL business as a wedding planner.

Bernadette has been shopping for her wedding dress and she told me that she has picked out two so far. Dougal said ‘if I have anything to do with it, she will have the expensive one!’ They have two bridesmaids Cleo Charlesville and Moe Kenin and the wedding is to be held in a newly built chapel. Dougal told me that his best man will be Das Wade, Cleo’s fiancé in SL and real life, and the groomsmen will be Seany1235 Blinker and Clive Hissop.

I asked them if they had ever imagined falling in love in SL before they joined. 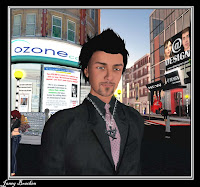 Dougal said ‘I was looking for a close friendship, but this went beyond what I ever dreamed.’ Bernadette said ‘yea I agree.’

I wanted to know what they both thought of critics who condemned SL relationships and Dougal told me ‘they forget that real ppl (people) are behind the avs, its sad when couples can’t enjoy their own space without being attacked.’ He continued ‘I think that if ppl here meet and get on really well with someone.... they should give it a go, never mind the critics, it’s beautiful!’ 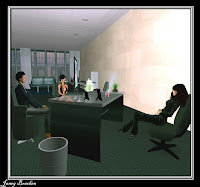 ‘I would like to think so yes, but it takes two.’ Yes it is early days yet for Bernadette and Dougal, and there is the huge distance ‘travel wise’ to overcome in real life, but this hasn’t put off other couples in SL. It will be interesting to see what their future holds, as for now, I hope they are very happy with their SL romance and I asked them not to forget my invitation to the wedding, so watch this space!!