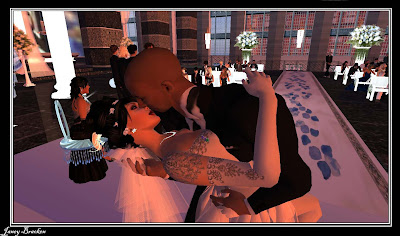 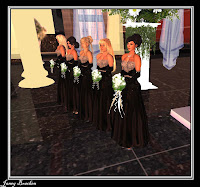 rleville and Das Wade had got engaged, both in real life and Second Life, at the same time. Although I had plagued Cleo and Das about the wedding date in SL, they had been rather secretive about when the big day should be. So it was with some delight that I got an invitation to the wedding a few days ago. The wedding was on Saturday, 24 January, and it was held in the prestigious Kensington building in SL Kensington.

I arrived about 15 minutes early and the main hall was already packed with people waiting for the loving couple. The hall is an elegant venue and is ver 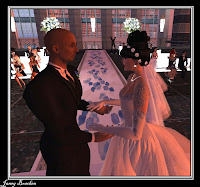 y fitting for SL Weddings. The pews were prettily decked with flowers and the carpet laid ready for the bride and her attendants to walk down. Das was already there, making sure he had plenty of time, wisely standing in position up by the alter.

I sat down at the back of the hall and waited for the event to begin. There were seven bride’s attendants, including SL London sim owner Debs Regent, and they all looked beautiful in their long gowns with cream lace bodices with dark brown flowing skirts. The bride’s attendants excitedly chattered to the groomsmen and there was the chaotic feeling that you get with all SL Weddings, as everyone worried about where they should stand and when they should start the long walk down the aisle. 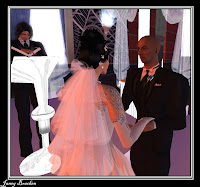 The Best man was Slippery Enzyme, who is a best friend of Cleo and Das. Gertyflirty GoldLust was the ring bearer, while Bernadette Halostar was the flower girl. Avery Reynolds was the Maid of Honour and Debs Regent, Feebe Fearne, Brie Janick and Tia Fouroux were the bridesmaids. The groomsmen were Clive Hissop, Mabon Lynagh, Dougal MacMoragh and Indego Hax.

Cleo looks stunning in a white satin gown with voile embroidered skirts. The bodice was encr 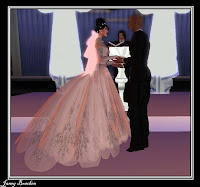 usted with tiny seed pearls and looked very elegant. Cleo’s hair was adorned with little white flowers and a short white veil was attached to the back of her swept-up hair.

The wedding went without a hitch, as Cleo and Das said their vows to each other and gazed into each other’s eyes. Once the service was over the wedding party made their way to the roof gardens at the top of the Kensington Building, the restaurant there was laid out with food and drink for the reception. Dancing their very first dance as SL man and wife, Cleo and Das looked so happy. No doubt this romantic SL wedding has forged their real life relationship even more. 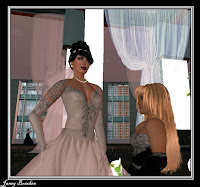 I caught up with Cleo the next day and I asked her about her fabulous dress. She said she had paid a designer to make it, but had actually designed the style herself. I asked Cleo if she had enjoyed the day and she said ‘It was amazing Janey, I loved every minute of it, love Das with all my heart in rl (real life) and SL and it meant the world to me, to both of us, I know, writing our own vows made it, I know exactly how he feels about me, as I do him.’ I spoke to Das as well an 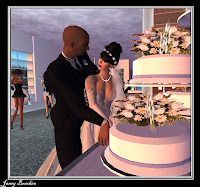 d he said ‘I would just like to say thank you too all our friends that came, and all the great people that I have met in SL.’

It was a lovely wedding, Cleo and Das enjoyed the day celebrating with their many friends, and I wish them all the happiness, both in real life and their virtual lives for a 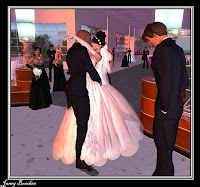 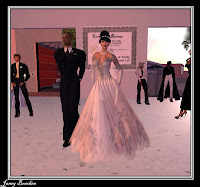 Best wishes to Das and Cleo for a wonderful future together.