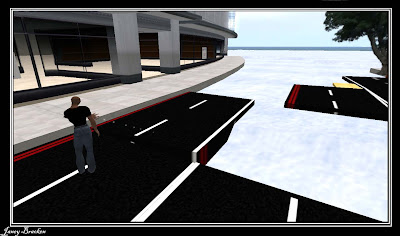 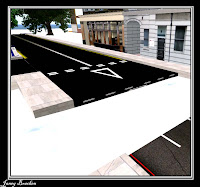 SL London has been having a makeover, with the roads in all the sims being replaced, and the new roads are looking smart, with nicely painted markings. However, whilst I appreciate that the road resurfacing is a time consuming job, some of the areas appear to have been left without being finished, especially around the Kensington area where traffic is lighter than the other areas of SL London. None the less, Kensington boasts some beautiful buildings including the smart DMGT Offices and the grand ‘The Kensington’ function rooms as well as the now famous ‘Greyhound’ public house. It is a shame that the look of the roads spoils the overall ambiance of the area, making private and promotional photographs more or less impossible to take, as well as making the area look a little run down to visitors who drop in. 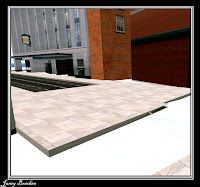 I am not the best person at crossing sims, and I fell down the gap between the Knightsbridge and Kensington sims the other day, where the join is pretty bad. I even spotted avatar andis Braveheart’s car down there, he had lost the car some time ago, while he was trying to cross the border, surely the sim crossings could be improved as well. 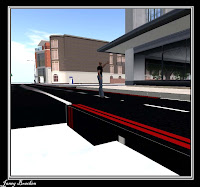 The strange thing was, after I had been discussing the roads in Kensington with my boss yesterday. I want away to another sim for a short while before returning, only to find that the very roads we had been talking about were in the process of being repaired by our very own 'Daz' from 'The SL London Public Works Dept'. What a spooky coincidence!
Hopefully Kensington will soon look it's classy self again, and continue to do so into the future.
Posted by Janey Bracken at 00:14

It's a shame the new road surfaces look like they have been textured by someone who has never seen the UK let alone London. Especially when the attention to detail in the buildings has always been the sims top attraction.

I personally thought they were better before.