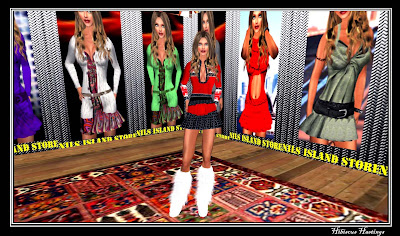 Recently a new shop opened in Chelsea, Nils Island Store, owned by nils Tomorrow. I met with nils to talk about her new store and discover a bit about her fashion philosophy.

Nils has been an rl womenswear designer for 15 years, and an sl designer for about 8 months. When first in sl, nils spent much of her time exploring and shopping but after a while she decided to give designing a try, and now, as she says, is “hooked”. Nils discovered London when an English friend of hers brought her to the Underground Club. After that she kept returning to the sims, finally opening her store in Chelsea. The Underground Club also played another role in nils’ fashion career because sl London fashionista, Brie Janick, suggested 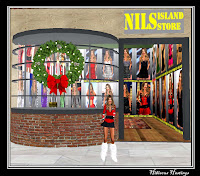 using one of nils’ dresses and adding the UGC logo to it for the UGC uniform.

I asked nils how she separates herself from the competition. She answered that every designer has a style which will attract a certain group of customers. She describes her typical customer as a women who is “trendy,fashion conscious, (who) knows what’s out there on the high street (and) and likes a feminine and sexy look”.

Nils is a very busy designer. She first opened a store near her home location, then tried a couple of other places before settling on Ch 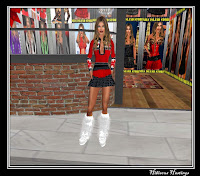 elsea, which she says can be her flagship store. And although the Chelsea store was only open about a week when I spoke with nils, she has since opened another place in a corner of the Miracle Fashion store. In addition, nils is a member of both fashcon and fashionlife, advertising to many avatars through both of these groups. Nils hopes to expand her business to even more stores, making her a designer to watch in the future.