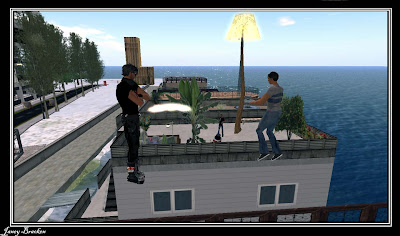 I witnessed one of the newbies being a nuisance last night. Although most people join Second Life and respect other people in the virtual world, you always get one or two who 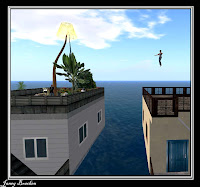 just have no manners and no consideration for anyone else from the beginning. (of course it’s not always newbies, some avatars just never fit in because of their unsocial behaviour).

It was clear that the newbie had invaded the space of a couple who were living in one of the houseboats down in SL Chelsea. I witnessed some heated discussion going on and it seemed that the newbie had landed on the top deck of the boat uninvited and refused to leave. As I had lived on one of the boats for a brief period, I had sympathy with the occupants, as I had previously had trouble with people who thought it was their right just to walk through my door, whether I wanted them there or not.

The good thing about living in SL London though, is that you can ask for assistance from the London Team, and as 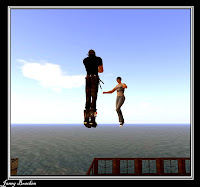 I watched, Chelsea Manager Seany1235 Blinker arrived and stood on the deck talking to the newbie. Although I couldn’t hear anything at that stage, I suddenly saw the newbie ejected off of the boat and out to the edge of the sim, so Seany must have used some muscle to throw him off.

The newbie was persistent though, he came straight back, hovering over the neighbouring boat, whilst hurtling insults at the occupants. Seany appeared to have crashed or been called away and the exchange of words went on. Shortly after, Seany reappeared and hovered next the to the unwelcome visitor, chatting to him and trying to make him see reason. The newbie was having none of it, and next thing Seany had used his power to ban him altogether from the sim. The newbie was wrenched from the site and thrown out to sea and I could see him as a little dot in the sky bouncing up and down trying to get back in, only this time he was shut out for good.

That is one of the problems with renting property in SL London, the ability of bad mannered people to fly up and stare at you through the window of your home, even h 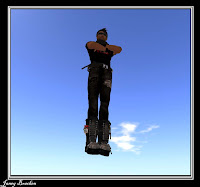 aving the cheek to ask you to let them in. I have blinds I can pull down in my apartment and I use them if someone is hovering outside, hoping they will get the message to leave. Of course calling one of the London team is always an option and one I would use if someone made a nuisance of themselves for too long. Fortunately with the apartments you can lock the door, however this does not stop the occasional resourceful avatar from invading your space as nowhere is completely private in SL.

I must admit though, I have enjoyed ejecting people and the feeling of power it gives me to see them suddenl 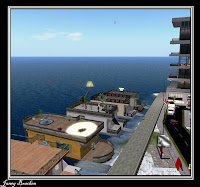 y whisked away. I own my own little house outside the London sims where I go to relax sometimes, and have had intruders there. The wicked streak in me comes to the fore as I press the button with glee to catapult the person off of my property. You can see, if you use your radar, how the avs try to get back but are unable to pass the barrier.

So come on you newbies, being the new kid on the block is no excuse for being rude and inconsiderate to other SL London residence, think about it before you get the boot altogether and a total ban from the London sims, or any other place you are pestering.
Posted by Janey Bracken at 08:10

As with most societies and let me assure you virtual world's are societies and not "the game" some chose to call it, we have social problems same in both.

Some would think we should go along with same old tried and tested remedies as used in organic, and maybe they are right.

I would say maybe just maybe, we have an opportunity to go our "second" way, and maybe try new stuff, which "could" impact on organic life as we know it in a positive way.

Cannot say what this "second" way would be, thats for social observers to say and maybe some have some ideas we could try?

But let us always rem personal space be it in virtual world, or in Organic world, are one of our main hangups, and we should pay heed to any request from a member of our community to do with maintaining this space.

I disagree with Kwamie.

SL shouldn't be an extension of real life. It is a game, just as real life is, but it should have different rules.

Newbies are not the real problem, most of them aren't new anyway and have been around since the start they just change avi's. The only way to truly police SL is to make it subscription only. The real problem is forgetting what is and isn't real.

SL London, apart from the odd building skin, is nothing like RL london thank god. There are no homeless people, organised crime gangs, drunks .... well okay there may be some drunks.

The new road services have strange markings I've never seen in Britain and the zebra crossings are obviously built from imagination. And there is the key to SL imagination.

Rather than making it more rl let use our imaginations and make it more SL and More Game.