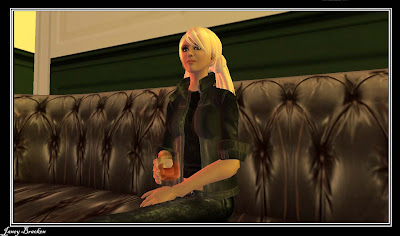 Avatar Silverstar McGiven wandered into SL London late on Christmas Eve, she had been looking all over the Second 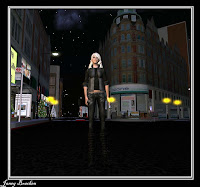 Life grid for something to do, she hated Christmas and thought she would find solace in the virtual world to distract her from real life. Silverstar’s real life had not been the same since her husband had left her for a younger, prettier woman, and this was her first Christmas on her own, just her and her tiny apartment, with her laptop for company. Her choosing! she could have gone to friends, but felt that they had included her out of pity, so she had thanked them, but declined their kind offer. 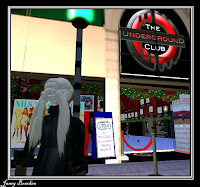 having a great time. DJ Mike and Host cutewillow were making sure that the club was rocking. She peeped in the door, but overcome with shyness because it was her first time in the sim, she decided not to join in the fun. Looking at her map she saw that there were some quieter sims in London and thought she would explore them, liking the look of the wonderful buildings, quite like being in real London, she thought.

Following her map she flew over to Kensington and saw the impressive DMGT Office block, plus the Kensington function rooms next door with the beautiful roof gardens. Then she spotted that there was a public house just across the way, it was 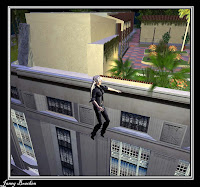 a copy of the real life Greyhound Pub in Kensington. Well as she was feeling blue and not really wanting to mix with people, she decided that this would be the place to go and sit and ponder her future in both SL and real life.

She entered the lifelike pub and sat in the comfy lounge seats opposite the bar, after taking a glass of whiskey from the server. Silverstar sat in real life too, with her solitary drink, and she felt overwhelmed with self pity for her avatar, as well as her real life entity. SL can certainly be a lonely place, she realised you could be on a high one day, enjoying being part of the virtual community or suddenly be plunged into despair when you think your virtual friends have deserted you.

Silverstar suddenly became aware of a movement up at the bar, seeing another avatar trying to rez into the area, looking like a little cloud with a nametag above it, the a 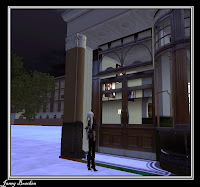 vatar slowly began to materialize. Swiftfellow Henshaw began to take shape, he was dressed in Victorian Costume with a bright red waistcoat, white shirt and smart black trousers with shiny black shoes. His dark hair was wavy and longish, covering his ears. He had a nice face, slightly tanned and clean shaven, with clear grey eyes. Silverstar greeted Swiftfellow with a ‘hello’ and Swift returned her greeting.

He seemed to sense her melancholy and asked if he could sit with her for a little while. Although she did not really want company, she agreed and he joined her. He had a strange quietness about him, she felt comfortable with him, and sensed that he was a gentle person, someone she could talk to, although she had never set eyes on him before. That was another thing she had noticed about SL, the fact that 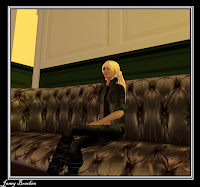 you could instantly assess people, something almost impossible in real life.

“May I ask you something?” he said looking at her. “Yes ok” Silverstar answered. “Why are you sitting alone in SL on Christmas Eve?” Silverstar was a little taken aback and a little flustered as she sat at her keyboard in real life. “Well” she said “I could have joined my friends in real life tonight, but I guess I thought that they might have only asked me over because they felt sorry for me, as I am on my own in real life.” It seemed odd that she was confiding in this avatar whom she had just met, but she trusted him for some reason. “Then may I ask you” he continued “why do you assume that your friends only want to see you out of pity when they are your frien 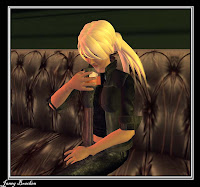 ds and must enjoy your company?” She stared back at him thinking, ‘he is right why did I think that, they are good friends we have such good times together.’ Smiling at Swiftfellow, she said “Do you know, you are perfectly right, it was me feeling sorry for myself and not my friends. I am going to log off and phone them to see if I can still go over there” Silverstar was curious about Swiftfellow and she clicked on him to read his profile, but nothing happened, no information. ‘Second Life playing up again’ she thought. She would check up on this avatar tomorrow, but for now she had to log off and join her real life friends in their Christmas celebrations.

Silverstar’s friends were delighted that she had decided to go over to see them and they had such a lovely Christmas Eve together, that they even talked her into coming to Christmas dinner the next day, she felt truly loved. Logging into SL on Christmas morning she searched for Swiftfellow Henshaw’s name, but it came up ‘not found’. She couldn’t make it out at all, and opening internet explorer, did a ‘Google’ search on Swiftfellow. His name did come up, quite a few pages on him, all very sad, his name was Richard Smitheson in real life and he had tragically died from a heart attack three months earlier. Linden Labs had been informed and had closed his account so that no one else could use his avatar. 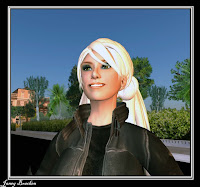 ring at her laptop in shock and disbelief, she had met an angel, the ghost of an avatar and a real life soul who had wanted to give her a message. She understood now, it was all up to her, she could go on feeling sorry for herself or make a great future with the help of her friends. “Thank you Swiftfellow” she said aloud as tears filled her eyes, she would never forget the caring avatar who looked out for her on Christmas Eve.

Janey, what a moving story about Silverstar McGiven and Swiftfellow Henshaw. It is wonderful that the spirit of Christmas exists in London and in virtual lives. We will all remember the angel Swiftfellow. Through his love we hope that Silverstar has a wonderful Christmas and continues to be part of our loving community, that we may one day meet up with her and her friends in that special location of The Greyhound inside real London too. Happy Christmas to all, wishing you all love and happiness from Debs Butler (Debs Regent in SL)

What a lovely and moving story. May the spirit of Swiftfellow touch the hearts of lonely people everwhere and show them how to accept the love and friendship of those who truly care about them. Merry Christmas!

What a wonderful story! Thank you for posting it. Merry Christmas!