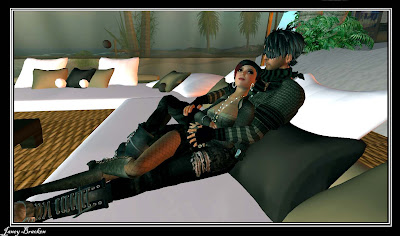 When we all went to Cher Demonge’s grand opening of his store a few days ago, I saw London Team members Seany 1235 Blinker and Brie Janick arrive together at the ‘do’. Then I wasn’t too sure, as there had been a lot going on, but I thought I heard someone say that Brie was actually sitting with Seany in real life, Seany living in the South West of Engl 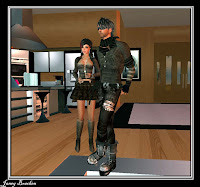 and, and Brie coming from London, (there are 5 hours travelling time between them), I thought I had heard wrongly. However, I had heard correctly after all, as the team all got together for a conference chat and Brie had indeed travelled down to Cornwall to see Seany.

Brie and Seany had been married in SL on the 28 June 2008 after meeting back in February in the Underground Club, Knightsbridge. It had been a wedding that everyone had been delighted to hear about, as they are such a well liked couple and are two of the hardest working people in the London sims. 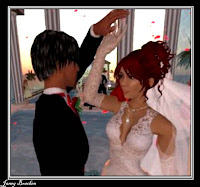 to real life with their relationship. They have built a dream home together in SL, a tropical Island complete with a futuristic fully fitted modern house, including a large fish tank built into the floor. The house holds a great secret, the little teleport button on the wall takes you to a magical underground cavern with lakes and rock formations. Outside the house they have a fabulous garden with waterfalls and a hidden cave. On another part of the Island Brie and Seany showed us a fantastic tree house they had just had built, little lofty cabins with luxury furnishings where you could sit and chat with your friends, whilst watching the beautiful SL sunsets. Lastly they showed us the place they like to come to and relax, after a busy day working in the London sims, a large Bedouin style Tent on the beach where they can sprawl out on the comfy cushions and watch the oce 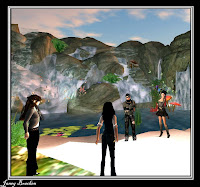 an a few yards away. Brie and Seany have made an absolute paradise for themselves and you can tell their joy at having such a perfect place to come home to.

Brie told me that her and Seany had been together nearly 9 months and at first they said they would never fall in love in the game. Brie said ‘but we did and we decided we was going to spend new years’ together.’ I asked her if they contacted each other in real life all the time, and she told me ‘yes msn ,webcam’ she said ‘phone everyday 3 or 4 hours a night.’ She continued ‘we had decided that New Years’ we would m 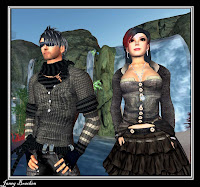 eet, spend week together, but last week it got to the point we wanted to be together, so I said ok, after 2 days I jumped on a train.’

I asked Seany and Brie if it had been strange being married in SL, but not having any real one to one contact in real life, Brie said ‘yes, def(initely)’, but we knew we loved each other.’ Seany told me ‘yes it was, but it was at the point of the marriage I knew I had real feelings as well’ Brie agreed ‘and it was real.’ Brie said ‘when I woke up he was the first person I wanted to speak to, when I married him, my vowels, I meant them’ Seany added ‘same as mine.’ Brie told me ‘yes we got to know each other on a diff(erent) level.’ Seany said ‘Yes for sure, yes we talked loads more here.’ Brie said ‘I remember Janey, at first he was so scared to tell me his feelings, lol he would giggle and mumble’ 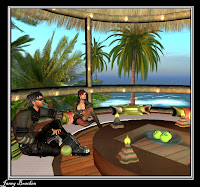 Seany agreed ‘yes I was!’ Brie continued 'I was like, what are you saying man haha’ Seany laughed at this saying ‘oi lol’


Brie told me ‘yes in rl I’m a very guarded person u know, took me out of my comfort zone a bit u know’ but she said ‘was easier cause we worked together and saw each other so the more time we spent together the more it became real.’

I wanted to know how Brie felt about meeting Seany in real life for the first time, she said ‘I was terrified on the train, very, very nervous I remembe 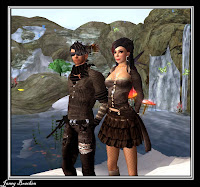 r sending him a text saying last chance to back out when I was at the station ready to get on the train lol.’ I asked her how she felt about the distance between them, she told me ‘we know we love each and we want to be together, its so hard being apart. I am going up at New Years’ for a week but know he’s my world and my soul mate’ Seany said ‘I hate being so far from her’ Brie added ‘and I love him when we met was like I’d known him all my life’ Seany agreed ‘yep same here’ She said ‘we became so settled and comfortable after 5 min, I was so get the kettle on then, haha.' I think Seany summed their feelings up when he said ‘I’ve never felt like this before, I love her so much, never knew I could feel like this.’

For the rest of us who know them, it is obvious that Seany and Brie are right together and although people knock relationships occurring in Second Life (mostly by people who have never entered a virtual world I might add!!), it is plain to see that people who do meet in places like SL get to know each other at a quicker pace than they would dating in real life, spending more time actually communicating and telling each other their dreams and ideals, somehow there is no awkward barrier in the virtual environment, that there may be at the beginning of a real life first date. You would have to go a long way to meet a nicer couple than Brie and Seany and I wish them all the luck in the world with their real life future together.

What a wonderful story. People talk about real life or second life, but the important thing is true life, which is what we have here. Best wishes to Brie and Seany.

yeah brill story, i love these two, they are 2 of the best people i have met in sl,

This is a lovely story Janey. Second Life and first life are never separate. As Hibiscus says, 'True Life' is where it is and Brie and Seany testify to this with their touching story. There are two lovely people that are right together and would never have met had it not been for Virtual Worlds.

thank you janey what a great story you captured it just how it is :) and ty all for your great comments and ty to second life for bring brie into my life :)

Thanks janey for you amazing story. You captured me and seany and how we feel about each other exactly.The wonderful comments left are wonderful. Our love is real and the future looks set for us i say bring it on lol

Aww thank you so much for the interview Brie and Seany, I think all the comments speak for themselves, you are much loved by all your friends in SL London and we are lucky to know you both!!