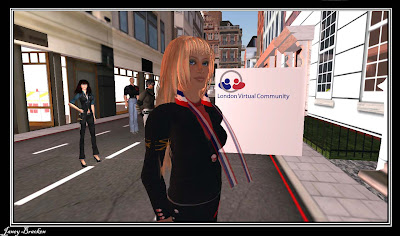 There is to be a new SL London logo and it suits the virtual Capital to a ‘t’. I was invited over for a preview on Monday and joined Debs Regent, Das Wade, Brie Janick and Se 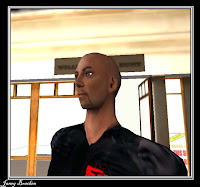 any1235 Blinker, who were discussing the final arrangements for using the logo. The logo has nice clean lines and is a powerful enough image to make an impression on residents and business people alike. The emphasis is on the SL London community, and this is exactly how the logo presents itself.

The new logo was designed by SL London Director Das Wade. Das, an IT expert, looks after all the technical side of things in SL London, and is a ver 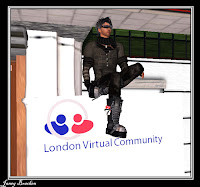 y busy person, making sure everything is running smoothly. Das told us that the logo, once installed in various locations within the London sims, will be a direct link to sites such as Debs Regent’s ‘SL London Virtual Commerce’ web site and our very own ‘Virtually London (Lite)’. Well done Das! on such a futuristic eye-catching design.
Posted by Janey Bracken at 07:37

i didnt know about this until i checked out the website, i like it very much well done das

Great Logo Das.. I am excited about the web site too.. there are all sorts of goodies coming up for members there.