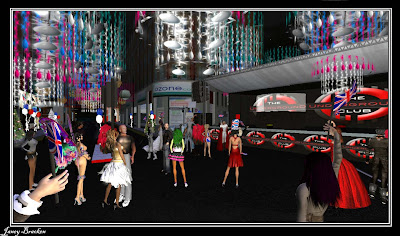 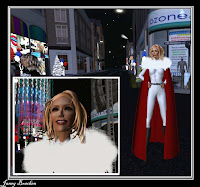 The holiday season arrived in the London sims on Wednesday when the Christmas lights outside the Underground Club in Knightsbridge were turned on. A large, festively dressed crowd was present when Katrin Linden, wearing a beautiful cloak appropriate for the occasion, threw the switch illuminating the Christmas lights. She said “It is an honour for me that I was invited to open the official winter fest for London in SL. All members that help building up London do a great job and it is wonderful to see what you have done during the last weeks. So to bring light into the midnight ;))) it is an honour to turn on the lights for you. Have a very great winter time and Christmas time all :).” 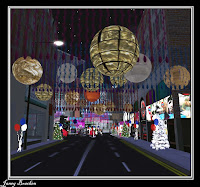 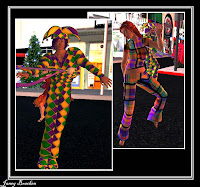 Not only were the streets ablaze with lights, but also with the brilliantly coloured outfits of the avatars dancing the night away. The prize for best multi-coloured outfit was hotly contested and ended in a split decision with andis Braveheart and Skyy Seelowe being declared as winners. Skyy wore an outfit made up of psychedelically coloured plaid squares, while andis was dressed in a jester’s outfit covered in yellow, green and purple diamonds.

Despite the usual SL difficulties the event was a great success and kicked off what is sure to be a lively and exciting holiday season in the London sims. Congratulations to all the organizers.

Thank you Janey. What a lovely shot of Katrin smiling while opening the winter lights in London. Happy Winter to everyone and Happy Christmas to the christians among us. I look forward to the program of events Feebe Fearne has planned for us this winter... all I know it that it's exciting!

Ya know, much as I personally believe Christmas is for December, this is VERY cool. Makes me feel all festive.

/me gets out and plugs in USB flashing snowman :-)

Christmas starts on December 25th and runs for 12 days.

I think pre-celebrating it for six weeks takes all the excitement out of it.

In saying that .... where did we put that tree?

i agree as christmas can go on too long but we are the mirror of RL London and if that day is the day they turn on the lights its good enough for us,

Thanks Debs, Katrin did have a beautiful face didn't she!! Great story from Hib, we both enjoyed the evening very much! Not forgetting that Cher designed and made the wonderful lights, thanks Cher they are magical. Early? what do you mean early Nikk and jonc, I've had my little Christmas tree out for a few days now and I can guarantee it won't even get dusty in SL!!