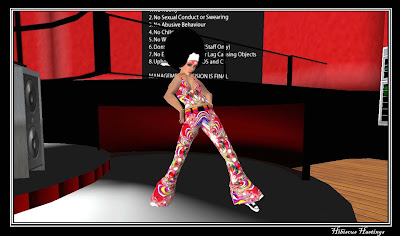 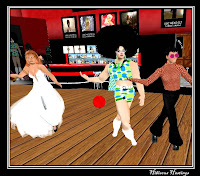 tors suddenly found themselves back in the 1970’s. The UGC was full of people dressed in bright colours, round eye glasses and polyester! Only John Travolta in his white suit was missing.
Debs Regent brought a touch of elegance to the disco, wearing a lovely flowing white gown. Seany1235 Blinker and Brie Janick could only be described as psychedelic. Clearly Seany had abandoned his punk 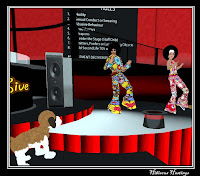 look and gone over to the disco side for this occasion, but as usual Seany and Brie made a handsome and striking couple.
Also up on the stage was Karla Preiss, wearing a bright yellow jumpsuit. Karla has just been promoted to hostess after finishing her training period, well done Karla. And then there was Disco Das Wade. He made numerous costume changes, but when I arrived he was wearing a mini skirt and crop t 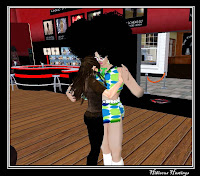 op along with a matching bag. His ensemble was completed with white knee high platform boots. Most surprising of all was the huge afro he was sporting, a big change from his usual look. He very kindly asked me to dance, and how could I say no, I don’t think I will ever dance with someone again wearing such an eye-popping outfit. Unfortunately I had not had the chance to get a 70’s outfit together, so I looked rather dull in comparison. Das then changed into what looked like a red hazardous m 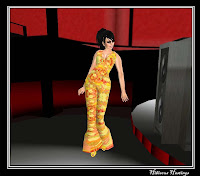 aterials suit, followed by a brief (and I do mean brief!) spell as Borat, and then into a favourite of mine, Mr. M & M. It was quite a show.
A number of newbies happened to pass through the club while all this was going on, it must have been an interesting experience for them. The Underground Club was the 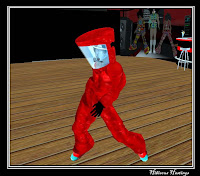 very first place I went dancing in SL, I hope their time in SL will be as happy as mine has been. All in all the UGC’s look back at disco was a lot of fun. 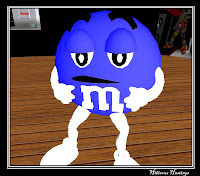