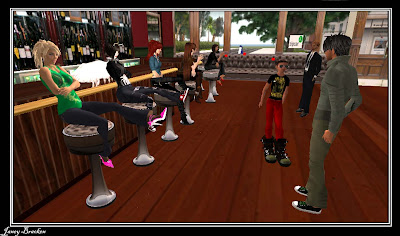 The real world and the virtual world overlapped yesterday as a real life gathering at the Greyhound Pub in Kensington, W8 was linked to the virtual Greyhound Pub in SL Kensington. Fellow reporter Hibiscus Hastings and I went over to the virtual pub at 6pm (GMT) 10am (SLT), where several avatars, including Terry Lightfoot, Elizabetta Westland, Chimera Cosmos, Tara Yates, Seany1235 Blinker, Gareth Otsuka and Diane Lohner had already 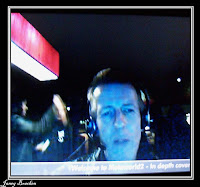 arrived. Kwame Oh, the virtual Landlord of the pub, also stood there, but as we could see on the link to the mogulus website (www.mogulus.com), the real version of Kwame was busy in the real bar.

Although, from the virtual end of the proceedings, we experienced difficulties with the set up of the camera in the real Greyhound, which was positioned a little bit away from the tables where the group sat, we could clearly see a few of our virtual friends and colleagues, in their real life personas, crossing the room. We spotted Debs Regent, the London sim owner and Nikk Huet as well as Kwame, as they walked in front of the camera. Soon after, our real friends made the link with us, and with the camera in a better position, we were able to talk to Nikk and the others. MalBurns Writer also made contact to greet us all. There was a mixed crowd of people in the real pub, including representatives from the real life media.

The virtual pub slowly filled with avatars, as did the real life pub with Second Lifers. The real pub had been stre 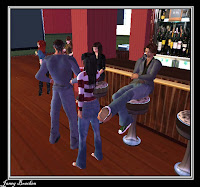 amed into the virtual pub via another camera to the giant screen on the wall, but this did not work for everyone, Hibiscus and myself included. However we were able to see and hear very well via the Mogulus link as the evening progressed.

People began to cross between worlds as Nikk Huet (Nik Hewitt), Das Wade, Elrik Merlin, Cleo Charleville and Kwame interacted with us in the virtual bar.

The real life meeting was timed to coincide with the Virtual Worlds London Conference, which is to he held over the next couple of days in the Queen Elizabeth II Hall, Westminster.

It was fun for people like me, Hib and Terry who never made it to the real pub this time, and it looked like the Second Lifers in the real pub had a great night meeting up with their friends and colleagues as well as interacting with us.
Posted by Janey Bracken at 08:43