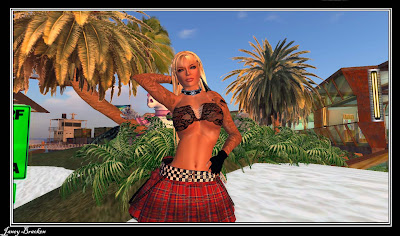 A new shop has opened in SL London’s Mayfair and it brings some Brazilian sunshine to the virtual Capital. It’s called Tribal Bamboo and is owned by designer Millane Avro, wh 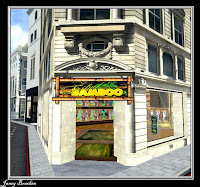 o also has a main store in Plush River X1. I first met Millane at one of the SL London Fashion shows and arranged to meet her the next day.

Millane invited me over to her main store and showed me around, she specializes in summer clothes, beautiful beach outfits, bikinis, shorts and trendy printed stone washed jeans. She has also designed a lovely range of shoes and boots. However there are so many great things in Millane’s shop that a visit is a must.

Millane, who is Brazilian, and a graphics designer in real life, told me that she had first joined 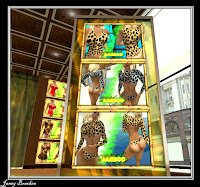 SL in February 2008 and bought her land about 4 months later. She had first come into SL to ‘play and enjoy’ she said, but then she started to design and make things, and her first designs were bikinis. She told me that ‘Brazilian girl means hot and sexy girl’, she added ‘I know that we are sexy people because we use mini kinis on the beach’.

I asked Millane how she chose London for her shop and she said that she looked around a lot in SL, finding new places to put her shops, and she had been surprised to see the SLLondon Fashion Week here in SL London and thought ‘perfect’. She said SL London is a beautiful place and she loves it.

So go and see Millane’s shop in Mayfair and get yourself some Brazilian sunshine by looking at her wonderful range of beachwear.
Posted by Janey Bracken at 01:12