Taking a Spin Around London! 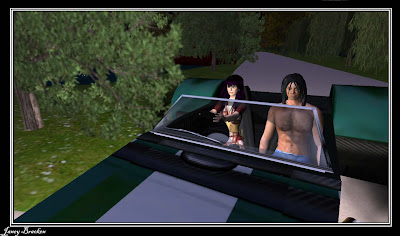 I’d seen Ruskin Thor in his car and Seany1235 Blinker in his, both beautifully sleek sports cars. Rus even gave me a 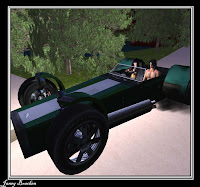 lift the other night when we went over to meet some friends in SL Mayfair. I thought this is the life, nice sports car, driving through the streets of London with the wind in my hair and the sun on my face.
Anyway I saw this car sales room in the ‘search menu’, it looked like a big place and very popular too, so I went over for a look, well I spotted a car quite closely resembling a Caterham 7 in racing green. It was love at first site and next thing I had paid for it and got the car in my inventory, deciding to go back to Hyde Park to try it out.

Once I got to the park I rezzed the car to the ground and sat behind the wheel, pressed the arrow keys on my keyboard and screeched off at 90 miles an hour, I was all over the place. I had no control at all, and to make it worse a newbie passing by managed to click on 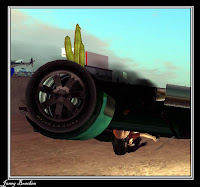 the passenger seat and next thing he was sitting next to me. I told him he had a cheek, but he ignored me as I hit everything in site, no tree was safe!!

I thought ‘I must get rid of the newbie’, as it was getting embarrassing, so I stopped jumped out of the car and swiftly put it back in my inventory, the newbie looked puzzled as the car vanished from under him. With that the newbie went off without a word. I saw my friend Drax Ember appear on line, so I asked him if he wanted to come for a drive and he said yes. Well I thought he might enjoy a spin around the park and that’s what it was, a spin, completely out of control!! Drax even had his shirt off in case I ditched the car into the Serpentine lake, which I came pretty close to doing. 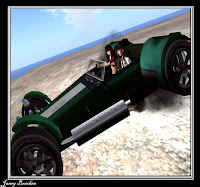 I thought that driving in the London sim was a bit dodgy, having knocked into every tree in the park, going into the London streets might mean me knocking down houses too, so I said to Drax that we should find a Sandbox that I could practice driving in (a Sandbox is a public area where people can build things and use scripted items).

We arrived in the Sandbox I had picked, and off we went! I was worse than ever, I could not keep the wheels straight, trying to avoid other avatars in the Sandbox, but heading right for them. It was a miracle that I didn’t hit anyone. Then to my shame, I overturned the car and me and Drax hung there upside down, good job we 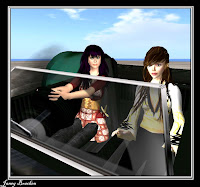 had our seat belts on! I said to Drax that I would try to flip the car over so it was the right way up, and I was so erratic that I actually managed it, so at least we were upright again! Poor Drax had enough of me and my driving, telling me that real life was calling. He looked a bit green around the gills as he said goodbye, I hope he managed to keep his dinner down.

My next victim arrived soon after, Hibiscus Hastings my friend and co writer was on line so I asked if she would like to join me in the death car. She agreed and next thing she was in the passenger seat and off we sped. Hib and I usually talk ten to the dozen, but for some reason she was very quiet and when I looked her teeth were clenched and her face was white as a sheet as I shot along the terrain, twisting and turning. Then to my horror I spotted that we were headed for the water and I tried to put the brakes on, once again turning the car over. Poor Hib!! I carried on and ended up under the water. I tried to flip the car over 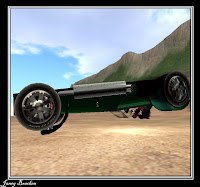 again, but still ended up travelling with the wheels uppermost with us underneath. By coincidence Hib decided it was time to go back to real life as well, so I was left with my wreck of a car.

Later on I decided to take the car back into London and practice through the virtual streets. It was at this stage that I realised that any animation overrides that I had been wearing may not have helped with the scripts in the car, so I removed my walk animation and anything else I could think of, and I was very nearly driving normally, though not quite!! Hib being the brave person that she is came back on and joined me again and we burned rubber screeching past the Underground Club and taking all the tight corners that the sim had to offer. Trouble is, when I got my car out today it refused to work, it must be me, even the car is frightened!!!
Posted by Janey Bracken at 00:15

Crazy women, i will have to race ya i just got anew porsche its very easy to drive,

we will have to burn up those new roads im building,

we will have to suggest a multi story carpark in SLLondon, we can burn it up round there, and hang around like ASBO kids,

Love the blog, as always

Just to be clear, when Janey invited me to go for a drive, she didn't actually tell me it was in a "death car" nor did she explain what she meant by "going for a spin"! However, I am looking forward to the next time when we can test out Cher's new roads. Look out London!

Hey Cher, you got a Porsche, that's not fair!! how come you can drive it easily? goes to show me and sl gadgets just don't get on! When I get my car fixed (it's busted for some reason!) We'll have that race. Hib you can choose who you want to be a passenger with. Of course if you got a car as well Hib, we could all hang out like ASBO kids, think you would be a right tareaway once you got wheels!