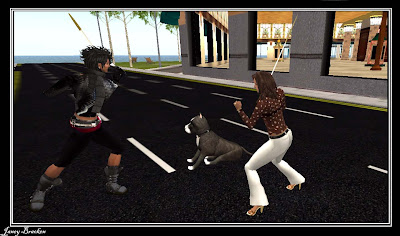 It started with a friendly chat at the side of the road! I was wandering through Chelsea yesterday when I came across two of the SL London shopkeepers, designers C 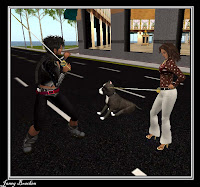 her Demonge of 'Bonjour' Boutique, and Albros Breda who has just opened her jewellery shop 'Cihuae'. They looked like they had been engaged in conversation for a while as I went over to see them. As I got closer I could see that they both held swords with beautiful jewelled handles.

Then to my astonishment, the swords were raised and they started to duel in the street, I could only imagine that they must have fallen out big time!! Cher had all the right moves as he seemed to dance around Albros, who stood her ground calmly. The blades looked like silver lightning as they flashed through the air, clashing as honed steel struck honed steel. What had got into these two, I could only guess, but it looked serious! 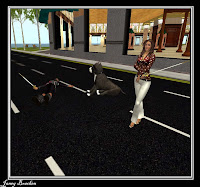 Although it looked as if Cher was running rings around Albros, she defended every move, as Cher's sword glanced off of hers. She had been biding her time though. Then, when I least expected it, she lunged forward delivering a fatal blow to poor Cher, who fell backwards as the cold steel pierced his heart. Cher lay prone on the floor as Albros stood triumphantly over him.

Then all was well, Cher returned to his feet, apparently unscathed, and I joined them as they stood smiling. This is Second Life you see, where all things are possible, yes you can play sword fighting and any other combat games, it's a lot of fun.

The swords are actually made by Albros and she has done a lovely job, they ar 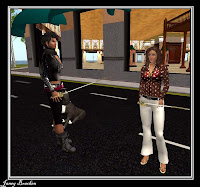 e a work of art, carefully crafted with jewels, and the sort of thing worn as a dress sword, that would enhance any second life uniform or period dress. I asked Albros if she would make me an ornamental dagger, which she agreed to do. I wondered if Albros was going to have the sword and other decorative weapons for sale in her store and she said that she would consider this. 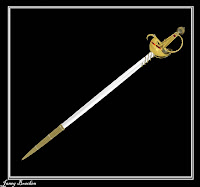 I'm glad that Cher and Albros are the best of friends, and it was probably a little bit of SL history I was watching, the first duel in a London sim, perhaps the London Managers should set up a duelling site in Hyde Park, how romantic to have some brave avatar defending your honour, as the sun rises over the trees, on a misty morning in the park.
Posted by Janey Bracken at 07:50

yay what a brilliant story,

i let her win, Honest!

great story janey shame my doggy Dee wasnt mentioned, although i was waiting for her to defend me and it never seemed to happen, Sl dogs are as useless as Rl dogs then it seems,

Well done Albros. It seems that Cher was a little 'cut up'. At least you could fall out, kill each other and still remain friends. Not sure that you could in Real Life?

Good idea to have a dueling area in the park. It will certainly enable people to settle their differences without long silences.

You never know, dueling could even become a cult, where people in RL come to settle their differences in SL. We should let marriage guidance councilors know about this. - Perhaps we can even take odds on who will win?

Hi Debs and Cher, thank you for your comments xx

Awww yes Cher, I should have mentioned your dog Dee, she sat there so bravely when it was all going on. Perhaps she thought you were doing so well that you didn't need defending, either that or she was thinking about her next meal!

Debs, yes dueling would be a great idea for solving disputes!! can you imagine, people could lay into each other, getting rid of all that pent up emotion, without actually getting hurt. I like your forward thinking, that's why you are such a great business person!

Thank you for the support Debs... Cher's such a good friend I let him believe he let me win... ty for posting the story of this fun duel Janey, I love your storytelling : )