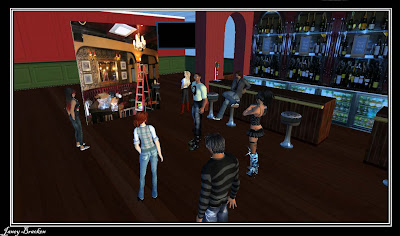 A little while ago my boss, Nikk (who works in the real life and SL DMGT building in Kensington) invited people from the SL London team, artists, DJ's, virtaul reporters, riends and colleagues, to a real life meeting in the Greyhound Pub in Kensington, W8.
With Virtual Worlds London coming up at QEII Conference Centre this month, they're doing it again!

Nikk says 'I wondered if anyone fancied joining us for a social in The Greyhound, Kensington, London?

Real life London will be filling up with folks from all over Europe, even the world, and I thought it might be cool to have a get together in the real life Greyhound, the bridge between realities in Kensington, to say hello. We already have folks coming from as far afield as Australia. From the looks of things, ALL the SL London staff will be there, which is a photo opertunity not to be missed!'

Situated in Second Life, opposite Northcliffe House (the Second Life and real life Daily Mail building in Derry Street), it’s as much part of the virtual furniture of London as the real one is of Kensington Square. Run by the same staff (avatar Kwame Oh) in both worlds, it often hosts real world and virtual world cross-over events and entertains real and virtual workers and locals from the Kensington area.

So, regardless, a perfect place for a pre-conference meet-up of virtual friends and work-mates from 6, including in-world press, musicians, developers and ‘mirror-world’ Kensington staff from the sims at 'sllondonestates.com'

All are welcome. The Greyhound staff will be streaming the evening to and from the virtual pub. Come meet some of the people who work in the local area (in both worlds), look at how the 2 cross, meet other people who’ll be attending Virtual Worlds London, and help break the reality barrier. It’s just around the corner from High Street Kensington tube station. 1, Kensington Square, London, W8 5EP.

Join us in real life, or join us in Second Life, See you there'. So go and meet Nikk and all the SL friends and colleagues in Kwame's famous real life Greyhound Pub on the 19th October and have a great time.

Thats the SL pub in the main picture above, with us looking at a picture of the real pub interior.

What a great night, Putting faces to all them names, Was great to see you all there and we need to organise that on a regular basis.