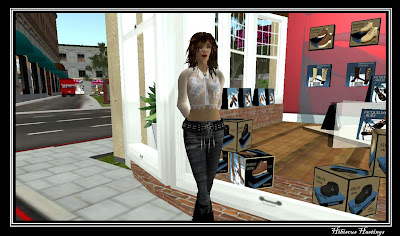 A new shop has opened in Chelsea, “Impressions”, owned by Menolly Reiderer 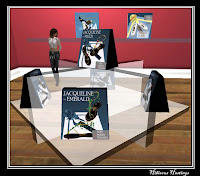 . It is in the lovely little row of shops across from the Harrods building. I happened to run into Menolly while I was out strolling around the neighbourhood, so we had a little chat about her business, and shoes in general, a topic dear to the heart of most female avatars.
Menolly first joined Second Life in January, 2007. She took a break for a while and returned in June 2007. She says “I was a bit of a shoe fanatic when I first joined and a shoe with 106 prims was my first ever build. I was a glutton for punishment and I didn’t stop!” Clearly she has a passion for her chosen field. Menolly continued “After giv 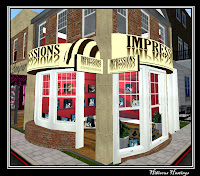 ing some (shoes) to friends, I was hassled by people who wanted to buy some of what I had done so it grew from there. “Impressions” has been around for about 6 to 8 months though I am only now really doing something with it.”
I asked Menolly what drew her to the London sims. She answered that “The London Fashion Week was suggested to me and I participated in that. I liked the area so much I asked Cleo (Cleopatra Charleville) about shops in the area and it happened from there.” Menolly had a kiosk outside the Kensington and hopes to participate in the next Fashion Week with a catwalk show. In the immediate future Menolly has decided to focus on specialising in sandals, as she says “there is a huge hole in the market for flats and they have been very po 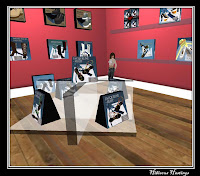 pular”. There are also some boots in the shop and a small range of mens shoes, mostly boots and slip on shoes, as well as some businesses in a box.
In addition to running the “Impressions” stores (there are a couple of “Impressions” stores in other sims), Menolly acts as a mentor and also does custom builds. To celebrate the opening of her new store in Chelsea, Menolly is having a promotion starting on October 25th and lasting for 48 hours. Shoes will be sold at half off the regular price (not including the businesses in a box), so this will be a good chance to visit the new store and add to your shoe collection too!
Hibiscus Hastings
Posted by Janey Bracken at 00:19