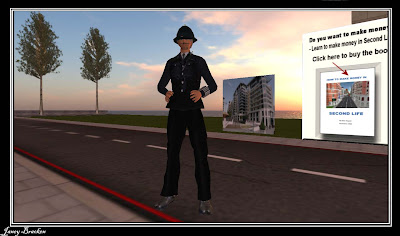 After the excitement of Fashion Week I met up with friends Hibiscus Hastings and Drax Ember and we stood talking in the street near the Underground Club, I won't tell you how many times I got run over by the rogue double decker bus as we chatted, but I never realised that they ran so frequently in London anyway. My fault I should have stayed on the pavement!! 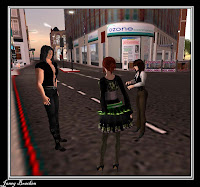 Anyway, saying goodbye to Hibiscus, Drax and I took a stroll and ended up in Chelsea near the embankment. There we saw a sight that you hardly ever see on the real streets of London, a Police Officer on patrol. Not a 'Blunkett Bobby' (Public Community Service Officer), but a fully fledged Police Officer!!! So at least in SL London we can all sleep safely in our beds.

We stopped to have a chat with the Policeman, who turned out to be Gerr Finesmith. Gerr told us that he makes his own uniforms in SL, and sometimes co 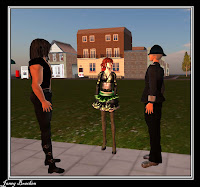 mes on as a Guardsman or a Beefeater as well. He looked really well turned out and his uniform was great, he is a frequent visitor to the London sim so keep an eye out for him and say hello.

By the way I bumped into SL London Events Manager Ruskin Thor last night, who was just getting over real life jet lag after getting back from a business trip. Ruskin, who masterminded the idea to hold the SLLondon Fashion Week, was really pleased to hear how well it had all gone in his absence. He tells me that he has many new events planned, so it looks like Hibiscus and I will be kept busy reporting over the coming months.
Posted by Janey Bracken at 07:54