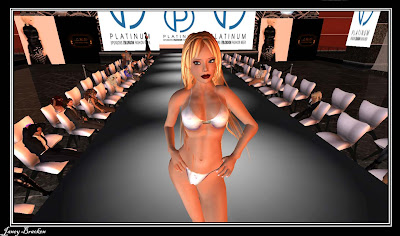 I can’t believe it’s all over, it all went so quickly, with the exciting lead up to SLLondon Fashion Week, the fantastic shows each night, and the knowledge that SL London hosted 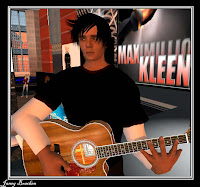 such an enormously brave venture and pulled it off magnificently, which they did against all the odds.

Let me explain, when I say against all the odds, I mean that SL was stretched to its virtual limits to accommodate so many avatars trying to get to the sim to watch the shows. Lag seemed to be particularly bad on S 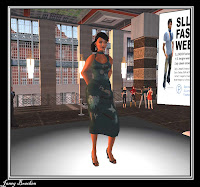 unday, the last day of the show, but everyone was in high spirits and determined to have a good time.
The show was opened by singer Maximillion Kleene and seventy plus people packed the sim, with still more queuing to get in. Maximillion’s performance was brilliant, hi 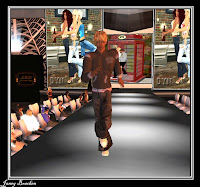 s style was laid back and easy, performing many songs including ‘Something Stupid’ and 'Sweet Caroline.’ His rendition of Snow Patrol's ‘Chasing Cars’ was truly spellbinding. The audience adored him and it was a great start to the evening. 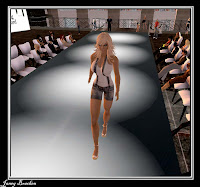 It became apparent though, that SL was slowing things down so much in the sim, that the team had to take the decision to re-start the region after Max’s act had finished. We all left for a few minutes until the sim had been re-set, coming back with great anticipation to watch the rest of the show. By this time the SL London team knew exactly what they had to do and just got on with it, showing great professionalism in the face of any SL hiccups. 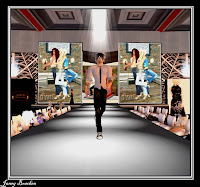 The first Designer group of the evening to take to the catwalk was the DYN Designer Collection (DYN Clothing have a super store in SL Mayfair). The models hit the catwalk, some of them running! showing their trendy smart/casual wear, it was fun to 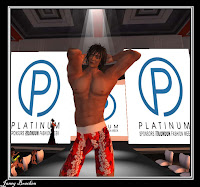 watch! DYN has a great range of clothing from dresses to separates and shoes. One model had a beautiful silk Chinese dress, matched with black stiletto shoes, the sort of outfit you could wear to a formal dinner, or if you wanted to look extra sleek and groomed for party, it would be perfect. In contrast, another model sported denim ‘hot pants,’ together with braces, over a white sleeveless tee shirt, just the thing for a warm summer's day in SL. 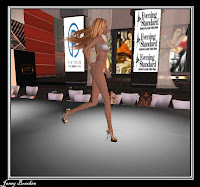 DYN caters for male avatars as well as the ladies and we saw some great designs for the boys, equally as smart for day wear, or to go clubbing in the evening. DYN put on a fabulous show and it was well worth the wait 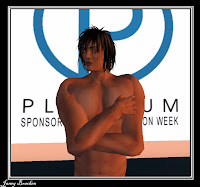 .
Platinum was next out for the finale, closing the catwalk shows, just as they had opened them a week ago, with a range of their beautiful lifelike skins and shapes. The first male model on the stage was one for the ladies, sporting a pair of tropical patterned shorts and showing us his rippling muscles, he strutted up and down the catwalk to the noisy applause and whoots of the audience. The female models walked gracefully down the catwalk showing their 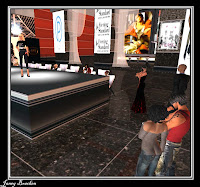 svelte figures in tiny bikinis, glowing with health, their realistic skins looking blemish free and very pretty.
With Platinum leaving the stage, the show was finally over and the fantastic week will stay in our memories for a long time. SL London sim owner Debs Regent took to the stage to say a few words. Debs declared ‘Can I thank everyone who contributed to make this such a successful event’ looking around the audience she continued ‘all of you fo 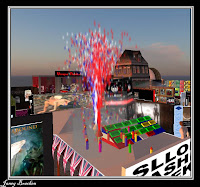 r coming’ ‘To the designers who presented their wonderful creations.’ She then said ‘But especially to this amazing team, Cleo, Das, Brie, Seany and all the rest…’ Cheers and rounds of applause filled the room as people expressed their feelings for Debs and her team.
Well that was it, only the last night party to be had, and it was the end of the show. I went off feeling a little sad that it was all over, but what a jewel in the crown for Debs and her team! Congratulations SL London Staff, the Designers, Models and Singers, who all played their part to make London the very Capital of the virtual world.
Posted by Janey Bracken at 14:51