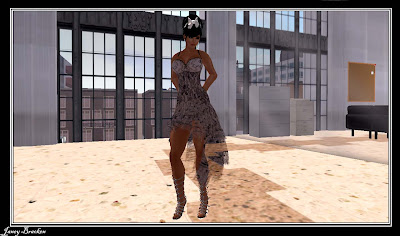 Fashion week had introduced some wonderful designers to the London sim and one designer, who is famous around the rest of the grid, is the very talented Melanie Zhao of Zhao’s Shoes.

Melanie showed off her delightful new collection of shoes at The Kensington last week and I managed to track her down for an interview. Melanie is friendly, outgoing and straightforward, making you feel comfortable and at ease with her from the beginning. Her enthusiasm for designing is clear to see from the way she talks about it. 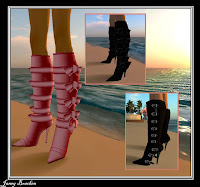 Melanie, who comes from Liverpool, has to juggle a full time real life job, as well as her SL business. Finding time to design and create her shoes, as well as dealing with endless messages, transaction issues, events, and missing items. She told me that she is the queen of afk (away from keyboard) because she can be dealing with 10 IM’s (messages) coming in all at once. She said ‘instead of "Busy" how about "not accepting IM's" I totally agree with her, setting yourself ‘Busy’ in SL is no help at all as people can still send messages interrupting what you are doing.

At the present time Melanie is mastering a program for creating sculpties. She told me that she would prefer to design ‘in world’ but the introduction of sculpties has changed building in SL completely. Melanie said “the only unfortunate thing is its changed building for the beginner in SL ...it used to be an even playing field” she continued “now it is becoming elitist with professional graphic designers coming in and leaving us self taught builders a little vulnerable”. I doubt Melanie should feel challenged by the new ‘professionals’ though, as she has a natural talent for de 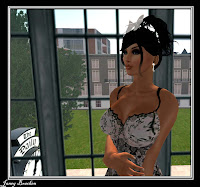 signing and the quality of her product is plain to see.

I asked Melanie how she started designing, she told me that the first object she actually built was a staircase. Her friend Tesla, who was making hats at the time, took Melanie to a sandbox and showed her the basics of building, from there she told me “...then it snowballed ...a bracelet, a belt, a house ...then my first shoe!” Mel gave me samples of her first builds which were amazing for someone who had just started, I put the shoes on and you would never have guessed that these were made by a novice. She gave me her very first attempt at a bracelet which I rezzed into the room, it was huge, filling the space between us. She laughingly said she hadn’t known how to resize then! The other bracelets she gave me were great, fitting my wrist exactly!

Melanie said that she wasn’t happy with the quality of the shoes that were around at the time, so she decided to make her own. She then gave copies to all her friends who told her to open a store. She opened her first shop in July 2007, saying it was a little wall sp 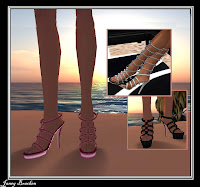 ace in a Gor sim. The owner of the shop, who was called zoey loved Melanie’s shoes and gave her the place in the shop. Melanie named her second pair of shoes zoey because of this. Melanie then became well known when her first real store was featured on Torley Linden’s flickr, she said she was delighted when he featured her.

I asked Melanie how she came to hear about the SLLondon Fashion Week and she told me that a friend of hers, Rebecca from ‘Platinum’ had recommended her to Brie Janick, one of the London Directors, Brie then got in touch with Melanie. I had attended the first catwalk show that Melanie had put on for the Fashion Week, and it went down a storm, the audience loved her collection (I tried to make it to the second show and crashed, with SL not letting me back into the area without rezzing problems. Fortunat 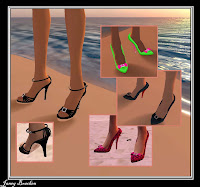 ely my friend and colleague Hibiscus Hastings got to the show and did a great report on it.) Melanie told me that she would like to give a special ‘thank you’ to Brie Janick and Cleo Charleville, who helped her put the show together in just an hour. She said “those two were fantastic”

Melanie gave me many samples of her latest designs, and I am overwhelmed at her generosity. I have had great pleasure trying them on and they are so beautifully made and so stylish. There is no worry about the fit as they come complete with a menu to alter the size to fit any av. Also there are wearable huds that allow control over the features, which are walk animations, footstep volume and ‘bling’ on or off. I instantly fell in love with the designs, which included a pair of gorgeous boots with stiletto heels and bows decorating the calf part of the boot. Another pair of boots with straps and buckles, just my sort of thing! The shoes too are extraordinary, with their delicate heels and pretty features, one style features the latest glad 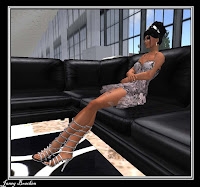 iator straps around the ankle and lower leg.

I asked Melanie if she had ever thought about taking her SL designs into the real world and she said if she could do that it would be a dream come true. I would love to see a real life manufacturer take a look at Melanie’s designs as they would be sure to make an impact on the real shoe industry.

I wanted to know if Melanie had any plans to open up a shop in SL London and she told me “it was very nice to be there, I was honoured” she said she “would be happy to have a store in every UK sim”. She continued “I’m proud to be from the UK and to be doing well in SL.” Well, SL London would certainly benefit from a brilliant designer such as Melanie opening a shop in the heart of the virtual capital, lets hope she decides to think about it soon, we would be honoured to have her here!
Posted by Janey Bracken at 00:08