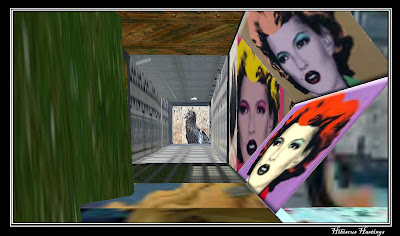 On Saturday I decided to go out for a walk through SL London, as I have not been around much in the past few weeks and wanted to try and catch up with what has been g 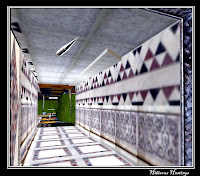 oing on. I left the office in Kensington and began to walk up the road towards Knightsbridge, when I fell through a soft spot. This hasn’t happened to me in a long while, but perhaps with all the work going on in the sim combined with some of the strange behaviour of SL lately, soft spots have begun to appear again.
Instead of tp’ing out I decided to continue my walk under the streets, which gives a completely different perspective on things. When I fell through the roa 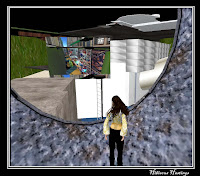 d I found myself in a large tunnel that looked like it was made up of small tiles, greyish in colour. At the end I could see a picture of graffiti, some concrete blocks, ladders that take you nowhere, water, silver coloured blocks and the edge of another tunnel or tube-like structure that ran almost parallel to the tunnel I was in. All very surreal. Occasional flying carpets would go by, as well as a small boat that appeared to be made out of aluminium. I walked to the end of my tunnel and then into the next tunnel, where I was able to catch the small boat. However, I must be to 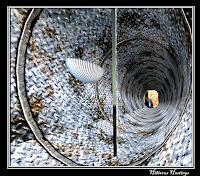 o heavy; once I sat in it, the boat was unable to move, so I got out and off it went. Come to think of it, perhaps I have gained weight and that was what made me sink through the street in the first place, who knows?
At this point I was under the Underground Club (which seems appropriate) and could hear all that was going on in there. However, even if I flew up to the top of my tunnel and could see outside, I couldn’t ge 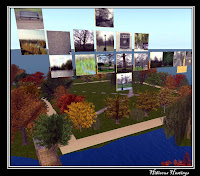 t out, all I would do was bang my head on the underside of the road outside the club, so I wasn’t able to join the fun in there, not without tp’ing, which I did not want to do at that point. I wanted to see how far I could go. I managed to catch a flying carpet and sat on it for a while. I passed through an area with what looked like textures for marble walls and floors, and ended up in another tunnel with some very Warholesque pictures along the sides and at the end a photo of a carrier pigeon! This was like being in a dream.
I am not quite sure what happened next, but I somehow found a way of flying up and through another soft spot. I found myself on the edge 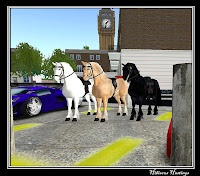 of Hyde Park and Knightsbridge. I continued flying up and discovered that over Hyde Park were hovering a whole series of photographs, like an art gallery in the sky! Interesting and unexpected!
I tried to fly around, but this was hard because SL was really acting up. At one point I saw myself flying with my head on completely backwards, like in “The Exorcist”. That was scary! I zigzagged my way over the sims and landed in Chelsea, where I found three horses parked alongside some cars in a parking lot. After seeing that I decided it was time for me to log off. Hopefully things will be back to normal now, whatever that means.
Hibiscus Hastings
Posted by Janey Bracken at 01:58