Sunday in the sim with Hibiscus 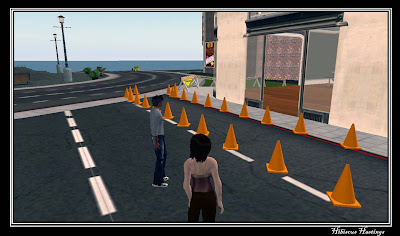 On Sundays I like to take a stroll through the London sim if possible. There are usually lots of people around and sometimes things are happening so it is a good time to just check the place out and discover what’s new.

I started off in Mayfair, near the Eros statue and low and what did I see but a lot of traffic cones and construction barriers surrounding the rental office. Seany123 Blinker was there, too, looking at them in a rather puzzled way. When I left he was talking with the rental office manager qwertybob Haystack, so everything was under control, but I still don’t know why the cones were out there. Perhaps they are doing some renovations. I came back later with my bicycle and wound in and out between the cones, which was good fun, even if they were not put there for that purpose.
Continuing on, I walked over to Chelsea and ran into a new person to Second Life who was visiting the London sim for the first time and wanted to practice speaking English. As Janey has written in another article, we often encounter people who come to the London sim because they wish to improve their language skills. We had a nice chat and I learned the visitor was from Hungary. He was very proficient in English, way ahead of my Hungarian skills, which are nil, although I have now learned one word, szia, which means “hi”. He had only been in Second Life for a couple of days but I was most impressed because he had been able to customize his avatar nicely and looked very much like someone from “Lord of the Rings”. When I was a few days old I had not made many changes to my avatar and was a slow learner. Unfortunately my new friend was rather shy and did not wish to have his picture taken, which was a shame, really, as he had done such a good job.

After that I con 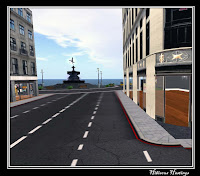 tinued on to Knightsbridge and met up with another first time visitor to London. He commented very favourably on the look of the sim and was also quite surprised at how well I stood up to being run over by one of the buses. I am much sturdier than I look. This visitor was looking for fun things to do, so I pointed him towards “The Underground Club”, which is always hopping and probably the most popular place in our sim.

My last conversation was with someone also looking for fun things to do but when he discovered I was older than him, he teleported out of the sim. Devastated by this rejection I returned to my flat to hide my wretched self away from anyone else who might be abroad. I don’t want to go scaring visitors away! But be warned, I have gotten over it now and am back out walking around.

PS, the cones disappeared and we never did find out what work was going on!!! just like real life London.
Posted by Janey Bracken at 00:35