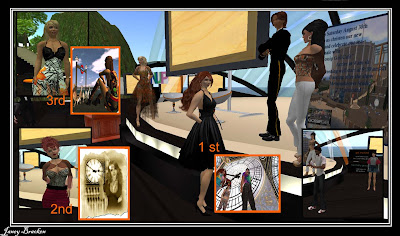 There was great excitement at Orange Island on Monday night, the winners of the first week of the Photography competition were announced. The competition is being organised by Orange, the communication company and Prim Perfect Magazine. The theme of the competition was the swinging 1960’s and Orange chose SL London for the first day of the contest. I went over to Orange Island and joined the audience to watch the presentations. The show was hosted by Saffia Widdershins, Owner and Editor of Prim Perfect Magazine, (Saffia was assisted by Diva Regina, Advertising and Client Relations Manager at Prim Perfect), Mat Sierota who is the Community Manager on Orange Island, and DBDigital Epsilon, Managing Director of the SS Galaxy.

SL London was represented by Knightsbridge and Kensington Manager Brie Janick who took the stage to announce the London winners. Brie made an excellent ambassador f

or SL London as she gave her introductory speech before calling the winners to the stage to accept their prizes. In first place was Wren Carling with her fantastic colourful picture of sixties’ dressed models in front of the face of Big Ben. Second Place went to Rhi Rossini who had a beautiful sepia portrait of a 1960s girl softly set against the famous clock face. In Third place Gweneth Lange caught the true atmosphere of London in the sixties with her model sitting in the London street gazing over towards the tube subway.
Congratulations to all the winners, and well done all the other entrants who sent in some superb pictures. I will be catching up with Wren Carling to ask her how she feels about winning the first leg of the competition.
Posted by Janey Bracken at 00:43