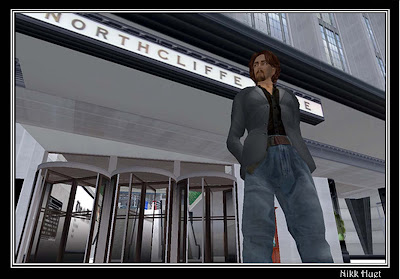 While I have greatly enjoyed interviewing and writing about all the gifted people who are connected with the London sims, there is one person whom I really should have written about earlier. He is the person who gave me the chance in the first place to have a go at reporting on the London blog. Yes it’s my SL boss, multi talented Nikk Huet. Nikk is actually a corporate alt, in real life he is Nik Hewitt, the Multi-Media Manager for Associated Northcliffe Digital (part of the DMGT group) in the UK. He states in his profile “I also promote our projects within virtual worlds and look for new metaverse opportunities for business, information delivery, and leisure.” The Associated Northcliffe Digital web

site says they are ‘Experimenting with new distribution and marketing channels such as Facebook and Second Life’ Nikk is also one of SL’s great builders, creating the DMGT (Daily Mail Offices) building in SL Kensington W8, a replica of the real life building. Nikk gives details of the real building on his Flickr page saying “After almost 100 years in Fleet Street, the DMGT left it’s original premises in 1988 to move to Northcliffe House in Kensington. 10,000 tons of rubble were removed to create the vast 115 feet (35m) high atrium, with a domed roof containing 64 tons of glass” He goes on to say about the SL version “This is that building, and the home of the DMGT in the virtual world of Second Life. Based in the London sims off High Street Kensington. It’s an almost exact replica of the real life building and used to provide a point of contact for our metaverse developments and meetings"
To say Nikk is incredibly busy is putting it lightly, as well as being a BAFTA winning film maker, and expoloring other online marketing possibilities he has other projects going on including ‘The Big Green Switch’ web site (for which he recently won an award from ‘The New Statesman’). You can visit the Big Green Switch sim in SL and take away a varity of eco-freebies as part of their enviromental awaeness campaign or carbon offset your sim or AV with their tree planting programmme. Then there is the well know ‘Lasting Tribute' web site and SL sim Tribute Island. This is one of the best ideas both in real life and

Second Life, it’s dedicated to those who have passed away, which includes people in the armed forces, celebrities, sportsmen and women, and many others from all walks of life. Tribute Island is one of SL’s success stories, bringing many visitors. Nikk holds lots of live gigs at Tribute Island, recently I want to a tribute to Sid Barratt (former front man to Pink Floyd) by avatar Mankind Tracer, which was a great success. There have been many quality artists appearing at the gigs and they are also supported by the fantastic ‘Radio Riel’ who get everyone up and dancing after the live performances.
Amonst other persuits, Nikk is a great sci-fi fan and LRPer, as you can see from his own blog ‘Best of Both Worlds’ (a humorous mixture of his interchangeable real and virtual lives). If you see Nikk about, say hello, but please remember he is a very busy man so don’t be offended if he is rushing off somewhere to get something done. The chances are you may have met him already over the last few years, not as Nikk, but as a certian mysterious and colourful character who travel through time and space in SL, so be on your guard ;-)
Posted by Janey Bracken at 08:28