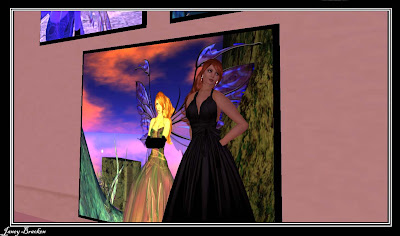 After the first round of the Orange and Prim Perfect swinging 60s’ photographic competition I caught up with winner Wren Carling. Wren is certainly on the crest of a wave at the moment and you can’t help but share her happiness and excitement that her work is receiving the recognition that it deserves. Among the prizes that she received is a Gallery in SL Knightsbr 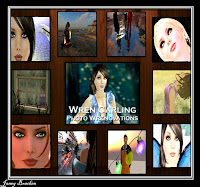 idge where she can display her work for a month, so I went over to meet her and to look at her beautiful pictures.
Wren is a lovely bubbly person and her enthusiasm shines through as she talks about her photographs. Wren is an art student from America, and is studying for her Bachelors Degree in Graphic Design in real life. She has been in Second Life for just over a year. She said she loves the London sims, but jokingly says she always wondered if SL London closes every day at 4pm for teatime!! She went on to say that you can get the feel for the sense of English humour when you walk down the streets. I asked her if she had been a photographer in real life and she told me that photography had been searching for her in real life, but finally found her in SL!
When I asked her to described her photography she said that she had been told that her work has emotion and admits that she does try to find a bit of that with each click, but describing her work herself, she says it’s ‘Luck meets artistic eye’ By luck she explained that avs’ do not cooperate, you tell people to stay still and they move out of the shot, and she laughingly continued ‘and the blinking! Ahhhhh! Who said you were allowed to BLINK??? I know just what she means, even taking pictures of myself in SL, my av doesn’t want to be at the right angle or looking in the right direction and yes she is right about the blinking!! On a serious note, though Wren says she specializes, and is known, for her close up shots. Wren told me that she had started taking fun pictures of her friends when she came into SL, which turned into a bit of a photo obsession and eventual business. She continued to say that fortunately for her she had some really great people encouraging her all along the way. 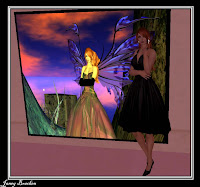 I asked Wren what the advantages are in SL and she said ‘One of the things I always say is: “SL ROCKS!” We have this huge world at our fingertips to do almost anything we want to do! In my own observance, I see two different people in SL: those who wander and those who create. Nothing is wrong with either one mind you, but I am most definitely the creator type. I find the advantages here are incredible. We have freedoms to produce just about anything we can think of and also succeed at it. When I take my photographs, I can change the sky to sunset, or change the water to red or purple, just to name a few. I can create something cheerful or disturbing…all by clicking a few buttons. We have some great tools to take advantage of…all here for the taking”. And Wren is certainly right, she uses SL to it’s full potential with her beautiful pictures.
I wanted to know if Wren had found it easy to create the 1960s picture for the competition, she said “It was the most challenging for the week. In order to stay within the theme, my team and I searched for the right clothing and made some 60’s props as well. I was inspired by the giant clocks of Big Ben’s innards and immediately connected them with “back in time to the swinging sixties”. She added “I will surely visit London again. There is so much to photograph and enjoy there. I really appreciate all the details that went into the design. It’s the kind of place that makes you smile”. 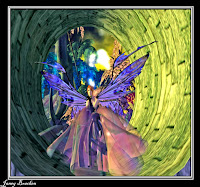 I asked Wren how she felt when her name was called out at the awards ceremony, she said “When I heard my name I was so thrilled! I am still so excited about winning first place (and twice too!)(She had also won the prize for the photographer of the week). I had a great team and saw it as a win for us all”. She went on to say “I would love to thank my wonderful team that put up with my direction all week: Loxley Tatham, Wilma Philbin, and Major McCaw. They all worked hard and helped me come up with some great ideas for shots. Thanks guys!”
Wren has her work on display for a month at the Knightsbridge Gallery and also has her own Gallery called Photo Wrenovatins in the Wiladma Mall, on Wiladma Island
Posted by Janey Bracken at 00:19

The pictures are beautiful, congratulations, Wren, on winning the competition. I look forward to seeing more of your work.

Your Work Is Great!! Glad To See Someone With Such Skill Won!

Wren was such a lovely person to interview, she has a real passion for her real life art and SL photography, I hope she has a brilliant career in both worlds.

Thank you for the compliments! Janey did a wonderful job and I have recieved such nice feedback. I really appreciate the effort she gave. She did convey my words beautifully. Thanks to you as well, Janey, for interviewing me.