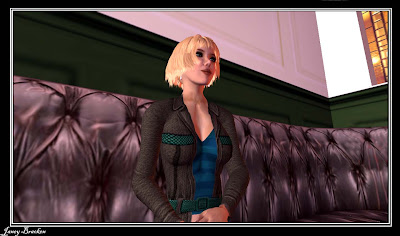 People love their homes and gardens in Second Life nearly as much as they do in their real life, in some cases maybe more so, as anything and everything is achievable in the virtual world. So you can create your dream house and grounds to suit your lifestyle. Of course in the real world you have every opportunity to search for those little touches that make your home a much desired residence, there are magazines, television make over shows, as well as many shops to visit, and if you are well heeled, designers to hire.
A little while ago there was hardly anywhere in Second Life that you could go to get advice on how to furnish your London home in style, or how to plant that garden that everybody would admire. That is until one special lady decided to become an avatar and join the SL community. Saffia Widdershins is that lady, and she has given SL a whole new perspective on what can be created in respect of elegant and stylish homes. Saffia came into SL on 19 January 2007, she has an impressive track record, including previously writing for The New Statesman. Saffia is the Owner and Editor of Prim Perfect, SL’s first Magazine for Homes and Gardens. She is also the Producer and presenter of Meta Makeover, SLCN.TV’s home and garden show and Saffia has just launched another Magazine, The Primgraph, which is aimed at historical and Steampunk sims.
I asked Saffia how she had first thought of starting her Prim Perfect project and she told me that it wasn’t long after she had joined SL that 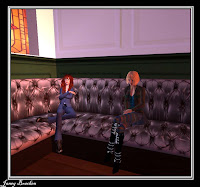 she started exploring and ended up renting a beautiful Castle in a medieval sim. She said that she had a 200 prim allowance in the Castle, but had no idea then what a prim was, or where there were furniture stores, let alone medieval furniture stores. Plus she said blogs were no help for furniture, there were dozens for Jewellery, hair and clothes etc. Nothing much on furniture except for a few entries on Linden Lifestyles. She said it had occurred to her that everyone was buying or renting houses in SL and there was no one to advise them. Also there was no outlet where designers could reach these SL homeowners. Saffia said that she began to pull ideas together, saying that the core of the planned magazine should be a nice apartment, decorated by a designer, in a nice sim, so then she could write about the sim, the designer and the apartment and give a month’s free rental in the apartment as a prize.
She told me that, fortunately the first sim owner she met, was Melody Regent, who had just started Venice Island, and Melody was shrewd enough to see that this would be a fantastic marketing opportunity. Saffia said that Melody had backed her all the way. She went on to say that she was lucky that several of the big designers were interested, Baron Grayson, Sue Stonebender, Sky Everitt, Szabo Horn and Troy Vogal. Also quite a few of the really excellent but lesser known designers had come on board too, people like Sofia Standish and Dellybean North, who have advertised in every edition.
Saffia certainly worked very hard to produce the first issue, basically by herself. She told me that she tramped the grid and sold the ads, she wrote most of the articles, did the layout, although she had a little help with the illustrations from an avatar who has since left. She said that Moodyloner Korobase had come in to write a couple of articles and promptly became the chief reporter. Safia told me that she has fantastic support, she has three teams, Alesia Markstein for the Primgraph, Diva Regina, Perry Applemoor, Owis Greenwood and Kittie Munro for Prim Perfect. For Meta Makeover, there are Davon Westland, Matelisse Criss and Darleez 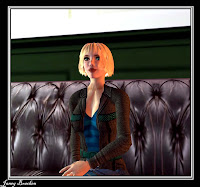 de Cuir. She also said that Jeremey Ryan and Dellybean North have done a fantastic job building the office spaces and other builds at a moment’s notice. Saffia said that she had applied to take part in the SL5B (SL fifth birthday) to salute SL Design. She only heard from the Lindens a week before SL5B opened, asking her how she wanted to use the land, she said it was a huge plot! Saffia went on to say Jeremey, assisted by Delly, had just built their HQ, he went on, in a single week, to construct the most amazing pavilion and all the designers rushed in to stock it. They were also asked to build a centre by SLCN (SL Cable Network), in which they only had 24 hours to complete and they achieved this as well.
Saffia is one of those people who would always succeed in whatever she does, not because she is lucky, but because she works really hard and has the drive and the initiative to make things happen. She says she believes that strength lies in drawing things together, blogs, acting to support stores, magazines, tv shows. Communication through subscribe-o-matics, building up rapport between creators and their clients. It was an honour to meet Saffia and I feel her story will encourage a lot more people in Second Life to follow their dreams, she is a true example of someone who has used SL to it’s full potential.
P.S. We met in the SL Greyhound Pub, Saffia had attended the real life meeting in the Greyhound Pub in Kensington W8 with the rest of the SL London team and colleagues and she told me that she had sat in the same booth as the virtual one we sat in for our interview.
Posted by Janey Bracken at 00:07

How interesting to learn about Saffia Widdershins. I have enjoyed Prim Perfect and Meta Makeover, and gotten lots of great decorating tips, too, so it is lovely learning about the person behind them.