Delian Mayo and Building in Mayfair 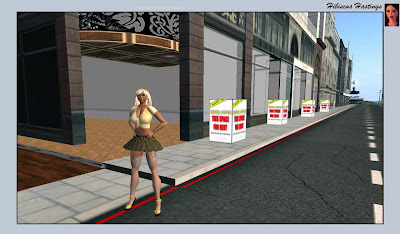 People whom I have met and chatted with in London have often commented on how beautiful the sims are and how much attention to detail there is. I have to agree and I was fortunate enough, Saturday afternoon, to meet up with one of the builders of the Mayfair sim, Delian Mayo. She is currently working on some shops along Conduit Street and she very kindly took some time out to answer my questions about her work. Delian loves to build and has been very successful at it. She has worked on many of the buildings in the Mayfair sim, including the penthouse in which the winner of the recent raffle will be staying. She originally began working in Mayfair after answering an advertisement for a builder. Her initial work was well received and Debs Regent, the owner of the sim has since asked her to work on other projects in the area.

Delian works from photos given to her by Debs. Delian first takes the images Debs provides and edits them, patching and manipulating them because there are a lot of perspective issues which make the photographs unusable just as they. She must also remove people, traffic and objects from the picture. All this is aside from actually building the building, which she then proceeds to do, as well as making the interiors of the shops. At the time I met up with Delian she had just finished spending about six hours working with photoshop, and this was on a Saturday evening, so she must enjoy her work and be very dedicated!
Delian also has shops of her own, not in the London sims, where she sells some of the things she makes, such as shoes and beds.
You can meet all kinds of interesting people while walking around London. I felt very lucky to have met up with one of the creative people who have helped to build the sim and get a little inside information into all the work that goes into it.